Conservation Breeding of vultures: Nandankanan is among the six participating zoos for the conservation breeding of White-backed vulture identified by CZA. A conservation breeding centre for white backed vultures has been constructed during the year 2011-12 in an off-exhibit area of Nandankanan over an area of 0.3 acres of enclosed area surrounded by about seven acres of forested area with financial assistance form CZA. The breeding centre has been developed as a satellite campus with all the basic facilities. Two nursery aviaries (10 X 12 X 8 ft.) and one colony aviary (100 X 40 X 20 ft.) have been constructed for the said purpose. Central Zoo Authority has directed the Authority of Gandhi Zoological Park, Gwalior to shift 12 rescued Long billed Vultures housed at Gandhi Zoological Park, Gwalior to Nandankanan Biological Park. We are in touch with authority of Gandhi Zoological Park, Gwalior for shifting of Long billed Vultures to Nandankanan.

The Central Zoo Authority (CZA) has taken initiative in establishing five vulture conbservation breeding centers in the zoos at Junagadh, Bhopal, Hydrabad and Bhubaneswar in 2007 and at Ranchi in 2009. Following which a Vulture Conservation Breeding Center has be constructed in an off-exhibit area of Nandankanan Biological Park, Bhubaneswar during the year 2011-12 in an area of 0.3 acreas surrounded by seven acres of undisturbed forested land with financial assistance from CZA. A total of Rs. 57.84 lakhs has been utilized to establish the centre.

The centre was established with objectives of develop protocol for captive management and breeding of long billed vultures for reintroduction and release in to wild and to generate awareness about the conservation need of the vultures and their role in the ecosystem.

The centre presently has one colony aviary (100'X40'X20'), two nursery aviary (10'X12'X8') and a laboratory complex with observatory room for CCTV monitoring, laboratory for analysis of biological samples, incubation room and biologist chamber.The aviaries are large enough for the vultures to perform wing excercises by flying from one end to another and to feed communically on carcasses, exactly as they do in the wild. Thereby minimizing the human contact with vultures.It also has species specific enclosure enrichments like natuaralistic nesting platforms and nest baskets, adequate perches in vertical and horizontal positions from the walls and water pools.All the perches are wrapped with coir ropes to prevent buble foot disease. Aviary doors open to galleries which provide double door protection which provides birds from accidental escape. The chain-linked mesh roof is having an inner lay netlon with one feet gap in between protect the birds from dashing against the roof.

The colony aviary is housing twelve numbers of long billed vultures brought from Gandhi Zoological Park, Gwalior on 27.11.2018. The vultures are provided with 2kg of buffalo meat with bone per vultures twice a week. The buffalo is kept in seven days quarantine to avoid diclofenac contamination as the retention time of diclofenac is 7 days in cow and buffalo. All the vultures are marked with leg bands for individual identity. Their activity pattern is being monitored through two fixed angle and one PTZ camera with infrared facility. Mating of two vultures pairs are already recorded through CCTV in the centre. 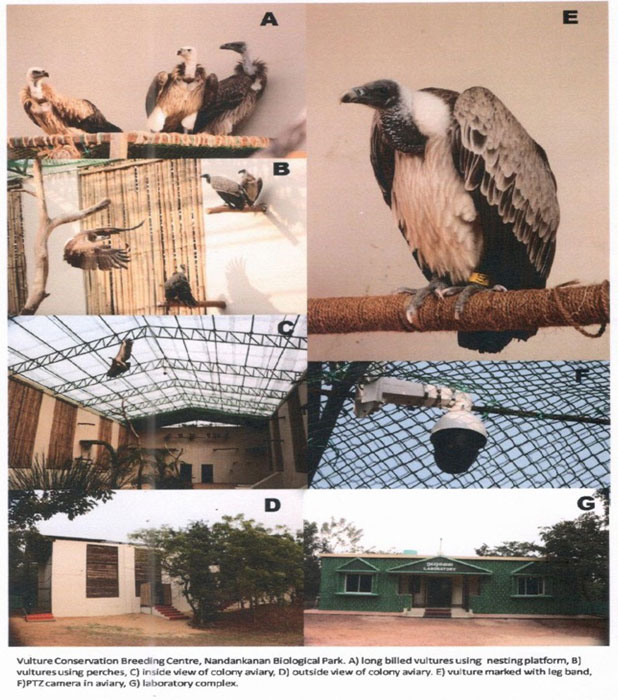