Gharials have bred for the first time in captivity in the world at Nandankanan Zoological Park in 1980. The breeding pool of Gharials was completed and started functioning in the February 1976 with introduction of three (One male & 2 female) Gharials. The pool covers an area of 1040 Sqm and constructed in oval shape with max-depth of 9.15 m. It measures 60mt at the longest part, 30mt at the widest part. It holds 2.70 million liters of water. Three hatchlings caught from river Mahanadi and one female obtained from Trivandrum were introduced during March, 1979. During January, 1980 one adult male crocodile was obtained from Frankfurt Zoo and released to the pool. During breeding season, courtship and mating was observed and first clutch of 25 eggs were laid in March, 1980. Hatching of crocodile eggs both in artificial hatchery and naturally inside the enclosure was successful in the same year and was continued in subsequent years. As a result of which the stock of Gharials in the pool was increased to 206 during the year 1985. It was decided by the Zoo administration to dispose the crocodile either by releasing them in nature or sending them to other Zoos under animal exchange programme.

During the year 1986-87, 81 Gharials were first released in Mahanadi river system. Releasing the Gharials in nature was continued in subsequent years and in total 578 Gharials were released in nature and 64 were transferred/ exchanged to other centers/ Zoos till date.

In the year 2015 the last adult male Gharial of Nandankanan has died. It was decided to find out the nest in the sand banks of the pool and incubated the available eggs artificially in sand cube with facility to monitor and regulate temperature and humidity. The effort was made to get Gharial hatchlings out of which 71 are surviving today with good health.

RELEASE OF GHARIAL CROCODILES INTO RIVER MAHANADI AT SATKOSIA GORGE 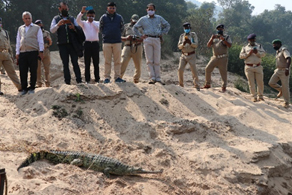 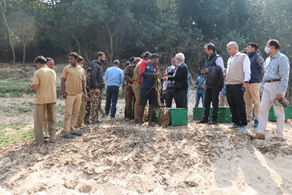 After a fifteen month of pilot study with release of 7 transmitter tagged sub-adult gharials since 20th July 2019, six number of transmitters tagged gharials of either sex (3M:3F), measuring 2.3m-3.3m from Nandankanan Biological Park as before are being released today, the 5th January 2021. The revised strategy for recovery of Gharials in Satkoshia-Gorge in its southern-most home is more conservation oriented. This includes the involvement of five forest divisions on either side of the river Mahanadi, implementation of rigid protection measures, declaration of ‘No Fishing Zone’ in 10 Kms of Satkoshia Gorge where present population of gharial is existing, spreading of awareness among local people, provision of compensation for the damaged fishing net and reward of Rs.1000/- for live Gharial caught.It is hoped that Gharials will be saved in the fabled Satkoshia Gorge with future releases as programmed in the ongoing ambitious scheme the “Species recovery of gharial Gavialis ganteticus, Gmelin in the river Mahanadi”.